Born on Portugal’s Azores Islands in the 1830s, Joe Silvey began whaling when he was just 12 years old. His sense of adventure led him to another side of the world.

Around 1860, Joe Silvey arrived to the BC coast on a whaling schooner and decided to jump ship to try his hand at gold mining. He had eclectic experiences, from harpooning whales in Burrard Inlet in a small, open rowboat, to serving up liquor to rambunctious millworkers, to purchasing the first seine fishing license in BC. Joe’s friends included saloon keeper Gassy Jack Deighton (for whom Vancouver’s Gastown is named), his grandfather in-law Chief Kiapilano (of the Capilano Nation), and a remittance man who liked to dress either in his wife’s clothes or none at all.

Portuguese Joe had 11 children with two wives, and his many descendants still populate the BC coast. But they also had their share of grief. Joe’s first wife, Khaltinaht, died only a few years into their marriage; Joe’s eldest child, Elizabeth, was later kidnapped and forced to marry against her will; and his sixth child, John, was murdered in a rowboat while on his way to buy clams.

Joe Silvey’s remarkable adventures, as he sought to secure a future for his family, took him up and down the coast. Eventually he settled with his family on Reid Island in Georgia Strait. The Silveys showed the determination and resourcefulness of many pioneer British Columbians; together, they helped shape this province into today’s beautiful and diverse land.

Khaltinaht was Joe’s first wife. Her grandfather was the prestigious Chief Kiapilano, and her uncle Sam Kwee-ahkult was chief at the Squamish Xwayxway village on the south shore of Burrard Inlet, that would later become Stanley Park. Khaltinaht and Joe had two daughters, but Khaltinaht grew ill and passed away. 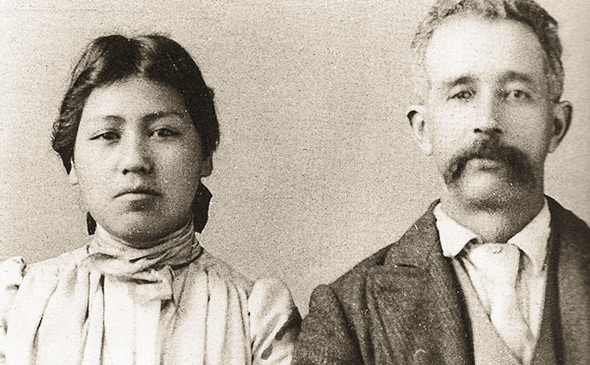 Left with two very young daughters, Joe remarried. It is likely that Joe was sailing up Georgia Strait along the Sechelt Peninsula when he met Kwahama Kwatleematt, whose Christian name was Lucy. They were wed in Sechelt, and built a large family.