“My work is a reflection of the respect I feel for the master carvers of long ago. I believe that we have to find a balance between traditional and contemporary art, and at the same time evolve and grow as Coast Salish people.” 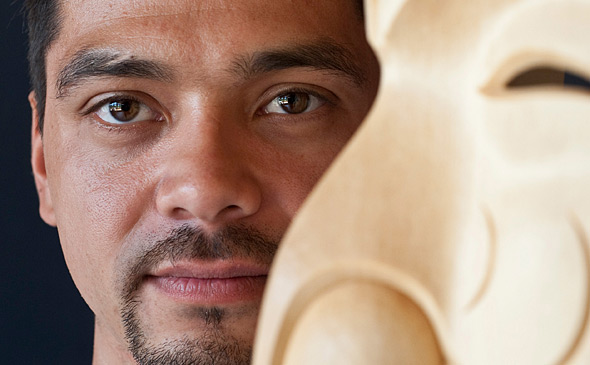 Luke Marston was born on Vancouver Island to carvers Jane and David Marston. He worked first with Coast Salish Master Carver Simon Charlie, followed by five years at the Royal British Columbia Museum’s Thunderbird Park. For over a decade, he has exhibited at Alcheringa Gallery (Victoria) and the Inuit Gallery (Vancouver). He’s also exhibited in the United States and Japan, and has received commissions from the Canadian Government, the Lieutenant Governor of British Columbia and the Nanaimo Airport.

In 2010, Luke was commissioned to complete a Healing Bentwood Box for the National Truth and Reconciliation Commission. This large cedar chest now travels throughout Canada as a symbol of healing for First Nation peoples across the country.

Luke is the great-great-grandson of Portuguese Joe Silvey.